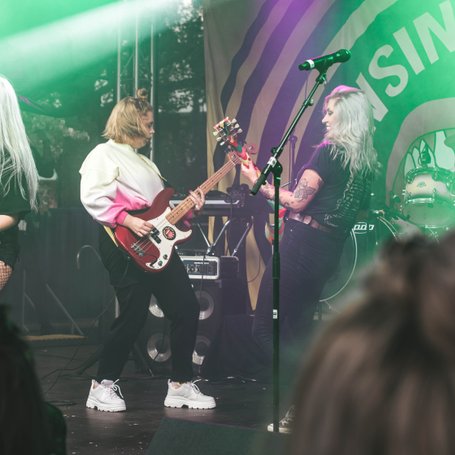 Sweden’s toughest och tightest face slap is spelled Browsing Collection. With their punk and metal influenced hard rock they deliver a show where no one leaves without an aching neck or a sore throat. The kick ass quartet, who always give 110% on stage, has during the years been receiving a lot of scholarships and prizes for their music along with writing songs for Swedish Television and playing at the biggest festivals in the country and touring Europe and South Korea.

In 2018 they released “Don’t Want To Dance”, the record that really marked the start of the band’s new sound and also got praised in global media for its attitude and energy. In 2020 it was followed by the band’s longed-for full-length album “Cyber Space Buffet”, more catchy and heavy than ever!

Despite declining the request a handfull of times, Browsing Collection 2022 finnally accepted the question of participating in the Swedish Melfest (Melodifestivalen). "We all know that hard rock isn't a very big part of the Swedish Melfest, but we can't just sit here anymore and be bummed about that, if we don't actually do something about it". The song "Face In The Crowd" was co-written together with Jimmy Wahlsteen and Sandra Bjurman and hit over 1 million streams just after a few weeks.

Browsing Collection is also working hard for equality in the hard rock business and every year they inspire, motivate and teach young girls and trans genders how to rock n' roll, during the annual Sweden Rock Camp. This is a hard rock camp, arranged toghether with Sweden Rock Festival and Studiefrämjandet, that paves the way for the next generation of musicians.